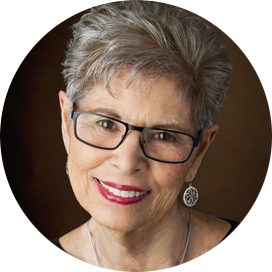 I have degrees from top-notch universities: I attended Brandeis University, received a Bachelor’s Degree in English from the University of Michigan and a Master of Arts from Harvard Graduate School of Education. I’ve had a razzle-dazzle career as publicist for The Viking Press in Manhattan; in San Diego, public television producer, print journalist, mayoral press secretary and public relations practitioner; book reviewer and essayist.

Still, being a mother and a grandmother is the best thing I’ve ever “done.” I have a terrific son and daughter. Each gifted me with two grandchildren, totaling four girls in six years. Adding in offspring on my husband’s side, we boast eight grandchildren — seven girls and a boy.

In 2006 my husband, Cockapoo and I moved from San Diego to Nashville to be near offspring and grandchildren. We live in an absurd-for-our-age, three-level angular wood house. Each spring, woodpeckers drill holes, portals for uninvited guests to take up residence in the rafters. We have a critter eviction service on speed-dial.

Sammy’s Broken Leg (Oh, No!) and the Amazing Cast That Fixed It is my first book.

STORY BEHIND THE STORY: THE BROKEN LEG

Sammy's Broken Leg (Oh, No!) and the Amazing Cast That Fixed It began nine years ago when my granddaughter, then 2+, was rushed to the Emergency Room with a broken femur (thigh bone). Eleven hours later I was handed a sleepy, scared child in a purple fiberglass spica cast from her chest to her ankle. The words "beached whale" came to mind.

The next four weeks were hard as we watched pain, immobility and disruption of her life turn our granddaughter into a sad, scrawny version of her robust self. I vowed to someday write a book to help other young children and their families cope with the physical and emotional upset of life interrupted by a cast – from a fracture or other cast-causing condition such as hip dysplasia.

My granddaughter recovered, but to this day is a bit more cautious than her peers about climbing walls and zip lines. Now 11, she says she remembers the worst episode in her life. I believe her. After a recent misstep, her face paled and she murmured, "Oh, no, not again." 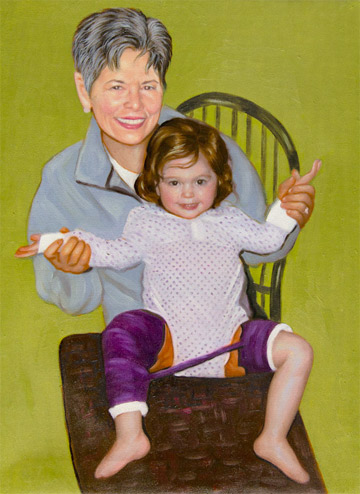 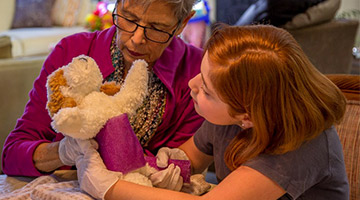 Visit with her for video clips, readings from the book and more.

STORY BEHIND THE STORY: THE BOOK 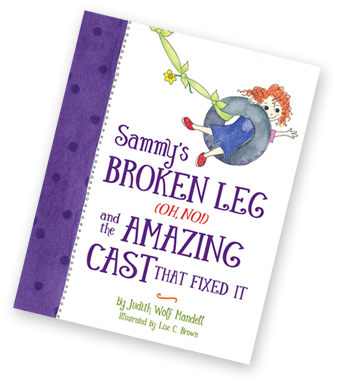 Despite a career as a writer, I had never written fiction, never a children's book. I sent the Sammy's Broken Leg... manuscript to friends and relatives. Most loved it, some disputed The Kisses. My hackles rose: do these folks also nay-say Santa, Peter Pan, the Tooth Fairy?

Over time, I did rewrite the manuscript to accommodate critiques and research:

Next up: finding an illustrator. I wanted an artist with a fanciful style, bright palette...and someone who would love and empathize with Sammy. Networking rules! After an online search brought portfolios from around the world, I found my illustrator, Lise C. Brown, eight miles from home. Unusual in author/illustrator arrangements, our relationship has been collaborative and collegial. I treasure it.

I wince recalling my quest for company(ies) to publish the hardcover, paperbound and e-book versions of Sammy. The evolving self-publishing industry is a muddle of vendors where apples-to-oranges comparisons make savvy shopping an exasperation, especially in the arena of illustrated children's books. A community college class; a straight-talking book, The Fine Print of Self-Publishing by Mark Levine*); advice from my graphic designer, Gwyn Snyder (GKS Creative), and her colleague, Bethany Brown (The Cadence Group), brought order out of chaos.

*Mark Levine, well-known author of six editions of The Fine Print of Self-Publishing said this of my efforts:

"I read your entire book. You are an example of how to proactively and successfully create a publishable children's book. The illustrations are definitely page-turners for a child. I also thought the story and illustrations balanced each other well. Your resourcefulness in finding an illustrator and getting the files made for the various distribution platforms is impressive."

As I write this, I'm embarked on the next stage: marketing. With my background as a professional publicist, it should be easy. Create a press kit, stuff it in an envelope with some photos, stamp, mail...and call to follow up. But times and practices have changed. As with all phases of this book venture, I'm learning, then doing. For starters: this website and Sammy's Facebook page. 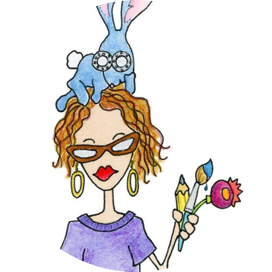 My life’s adventures began with an unspecified number of invisible rabbits following me around. I grew up on a quiet farm where I learned to entertain myself with nature, reading, and art. My love of animals led to a biology degree from Davidson College. In the real world, I had fun combining artistic and analytical skills working in computers, graphic design and marketing. Eventually tiring of the hectic technology scene, I ran my dad’s pottery studio for fourteen years and gratefully received many awards for my pottery.

The challenge of other media enticed me to become a full-time artist in 2012 with the help of my invisible rabbit muse. My colorful, whimsical creations are noted for their quirky details and often feature flying tomatoes, UFOs, taxis, and lots of critters. Most paintings involve lots of different media. My art is in collections worldwide. Smaller works for sale can be seen at www.LiseCBrown.com. I joyfully share life in Nashville, Tennessee with my husband and our family of rescued cats.

CREATION OF THE ART

First came the character sketches. Who is Sammy? Modeled after the author's granddaughter whose "Oh, No!" fall broke her femur, Sammy began as sweet Katie — but we thought kids would relate better to an active tomboy. Overalls are Sammy’s outfit of choice, paired with her favorite lavender shirt. Her inability to wear them while in a spica cast contributes to her sadness. Sammy’s constant companions are her sympathetic Dog and her stuffed Purple Puppy.

Next came typical steps in the creation of a picture book: distributing the text and pairing it with rough thumbnail sketches in a storyboard. (A storyboard is a diagram of all the pages on one sheet showing the flow of elements like text placement, background colors and spot illustrations vs. full-page spreads.) I made a dummy book of pencil sketches on index cards and then a life-size dummy with more detail, including some colored pencil where it was important in my pencil sketches.

I created the final art on Arches hot-press illustration board, which is smooth, very thick paper. I drew the outlines with Micron pens and painted them in with professional watercolors and gouache. Then I added details and texture with a variety of mediums, including colored pencils and Neocolor II water-soluble wax crayons. 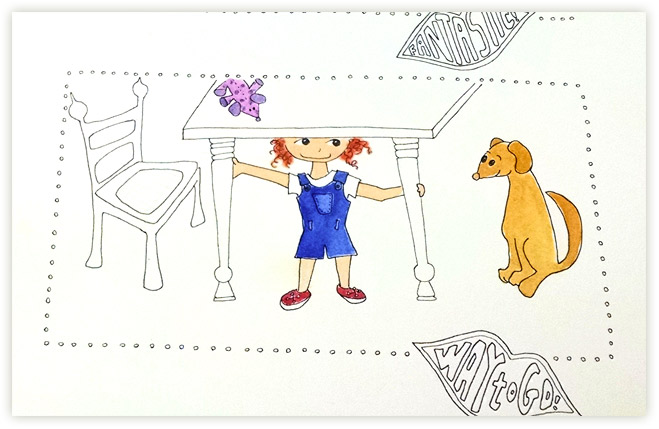 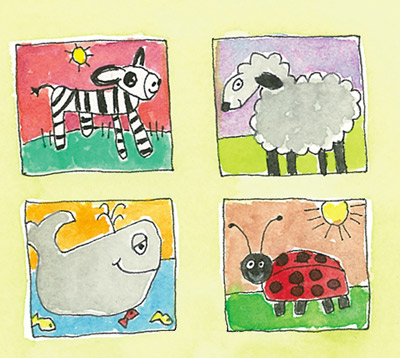 The animal paintings on the walls in the hospital waiting room were based on acrylic paintings by Alzheimer’s patient Roy Wunsch. Upon his diagnosis, Roy stated that he wanted his disease to be used to the greatest benefit possible. The sale of his canvas paintings and pottery benefits Abe’s Garden, a state-of-the-art Alzheimer’s care facility in Nashville. Through keeping mentally and physically active, Roy has slowed the progression of his disease. I have the great honor of working with him making pottery and sometimes as his acrylic-painting teacher. Using his paintings is my tribute to his fortitude and cheerfulness and my way of sharing the joy and benefits of art therapy.